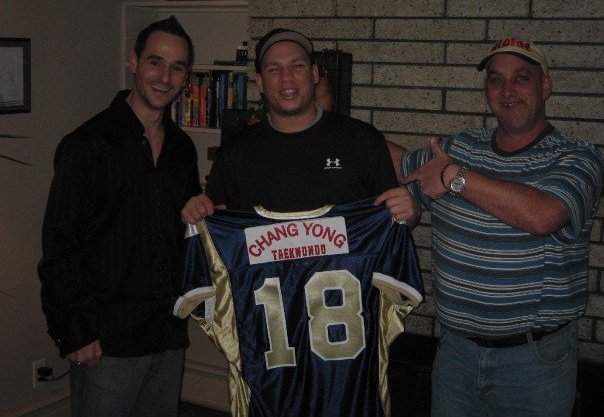 It’s a sad day to hear of a fellow SJMTFL player passing.

Tawn Stephenson (Far Right in the Photo) was with the SJMTFL for 16 years.  He started out as a player with the Stingrays in 2000 as their Center.  Tawn had spoken to Ken Lawrence about wanting his own team in the League for 2001.  He was determined to make sure he had all the equipment and everything ready to get a team in.  Tawn gathered all the required gear on his own dime and quickly called Ken back to let him know he was ready to go.

The Outlaws team started in 2001.  Tawn organized the team and initially had 26 players on the roster. After some refining, the Outlaws were narrowed down to just 11 players.  Tawn’s  team had some early success as they won the “B” titles back to back in 2002-03.  The biggest win for the Outlaws was the “A” title in 2004, where they defeated the Raiders for the first time ever in team history.  Tawn also enjoyed being a Ref in the Touch Football games and always making sure the game sheets were accurate and handed in on time.

Tawn was determined.  His drive for success was always present.  After the Outlaws folded in 2014, Tawn reached out to the Brick City Bombers in 2017 saying he wanted to be part of the team and help keep track of the game sheets. He really wanted to be around the football gridiron again.

Tawn was a Brick City Bomber when they won the “B” Title in 2017.  At the banquet, he was awarded the Brick City Bombers Sportsman of the year for the team.  The league also voted him to receive the League Sportsmanship award.  This was well deserved as he always put others before himself.  Tawn was a good person to be around.  He will be missed.

The Funeral is taking place at Brenan’s Funeral Home Chapel at 1pm on Wednesday June 6th.