The 1st Team Rep Meeting is on Thursday August 29th at 7pm Pub Down Under.

All teams wishing to be part of the 2019 SJMTFL season must have a representative present. New players and representatives for teams new to the league are also advised to attend.

If a team is unable to have a representative present, please call Ken Lawrence Sr. at 333-3891 to let him know.

Where: Pub Down Under 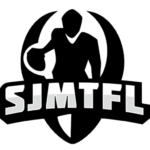 The Volunteers, in their second season, have finished in 1st Place again with a record of 8-2-1 . During the Regular Season, the Volunteers won two of the three games (20-19 and 20-0) against the Rage while the other game was a tie 28-28 on opening day.  The Rage are in their 10th season and they won the “A” title back in 2016.  The past is the past and now the only thing remains… one game to determine the “A” Champion!

The Brick City Bombers, in their fourth season, have gone to the “B” Championship each year.  The difference this year.. is that they are the defending “B” Champions.  The first year team, Average Joe’s, won 2 out of 3 games during the regular season (24-7 and 21-0) against the Bombers.  This game is a fight for the Brick City Bombers wanting to defend their title while the Average Joe’s want one!